skip to main | skip to sidebar

Things I have caught myself saying, which made me realize just how old I am

"You know, I really want to start investing." 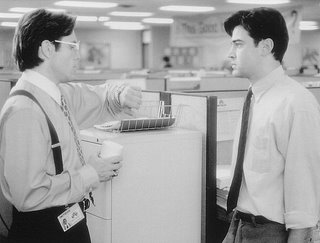 ummmm...yea...have you been in any wet t-shirt contests lately?
I think my boss is trying to live vicariously through me. Every morning, I come in and I usually go to his office (I get in about an hour after he does like every good government employee), and he asks me, “So, what’d you do last night?" It's as he's if expecting to hear some crazy story that ends with me getting a tattoo in Tijuana.

I guess I don’t blame him. He’s 30 years old and just had his third(?!) kid a little more than a month ago. I’m sure he misses the days of going out and getting crazy… if he ever had them. I hate to disappoint, but unfortunately, for the most part, the stories mainly include me watching a DVD (since the TV is all biffed up [that’s right, I’m using biffed up – thanks Katie!]).* Laurie told me to stay away from him, he’s extremely fertile. It’s best not to get too close.

One of the best parts of my day, though, is right around 4:00 every day, when a guy comes around with a GhostBusters-like vacuum and goes around making a vain attempt to vac up paper clips and post-its. One of these days I’m going to yell, “Who you gonna call??”

To live in a cave-man like state (circa 1975) in which television requires rabbit ears, internet requires theft, and the shower head resembles a seinfeld episode (apparently). and why are you still at work at 4? seriously.

Well, the internet gods seem to be pretty angry at me. I've attempted to update twice, and each time my less than stellar connection cut me off. That's my story and I'm sticking to it! My neighbors seem to be catching on to my illicit internet use, and are cutting me off periodically. Fantastic.

Things have been going pretty well here in San Antonio. My weekends have been pretty packed. Mal came up last weekend, which was awesome as always. We went to Sea World on Saturday, which was good overall. I believe it was another one of those 100+ degree days. We got there around noon, and proceeded to wait in lines for at least a half hour just to get tickets. I have never seen so many Mexicans in one place, not even at my cousin's wedding. Every thing has a line. Eve. Ry. Thing. I think we figured out what the problem was. While waiting in line to pay for food, the cashier stood there, change in hand, while she talked to another employee for a good two minutes. WHAT IS HAPPENING? You work at a theme park. Good God, it's so hot, just give me my water.

Anyway, we stood in line for like an hour to go on the river ride and got summarily drenched by the waterfall. It felt delicious. Of course, immediately afterward, the clouds gathered and it began to rain. We saw a couple of shows, the sea lions paid no attention whatsoever to the trainers, and Shamu made me believe in myself. The end.

I still haven't gotten quite comfortable enough at work to blog from there, but I'm becoming more and more convinced they don't know or give a crap what I do on my computer. The other day I turned in an assignment to my boss and he said "Umm... why don't you... go mess around on the internet for a while." And I did. It was beautiful.

I may begin to write entries at work and send them in to my ghost writer, Philip. He calls it freelancing, but I'm pretty sure you get to put your name on your own work when you freelance.

The most Constitutional city in America

Here's my attempt at a quick update. I am in San Antonio now, in my very dude-like sublet. Also, this guy doesn't have cable TV or internet, so I'm attempting to steal internet from his neighbors. However, none of the unsecured connections are very strong, so hopefully I will soon begin blogging and checking my personal e-mail at work.

Work started Monday. After watching a 45 minute video about sexual harrassment made specifically for the DOJ and a "computer security" video made around 1980 using CalecoVisions, I was put to work right away. So far I've written three decisions for two different judges, worked on a research question for a third and sat through a cancellation of removal case and an asylum case. So, it's been kind of busy, but very interesting work. I get to feel very important because you need secret passcodes to get everywhere in the building. Also, I was sworn in as an officer of the Department of Justice yesterday. By a judge. I have to defend the Constitution and America, and all that good stuff. Haha, they sure made a mistake.

Mal also came to visit, so I guess you can read about most of the weekend on his blog. He forgot to mention, however, one of the greatest moments of the weekend was while we were waiting for the special extra scene at the end of Pirates of the Carribean, the movie theatre "security guard" flashed us with his flashlight. What did he think we were doing? Don't answer that. This visit we went to the Quarry enough times to last me a year, and downtown to the Riverwalk at night, which is one of my favorite things to do. It's lit up very prettily. We also went to the SA Alamo Draft House for some beers and Nacho Libre. God help me, I enjoyed it. Jack Black, your crazy singing voice never gets old to me. Next time: Sea World!

The tonsils did not kill me

Well, I know I promised I would update on my tonsil status, preferably from an altered state, but sometimes things just don't go the way you planned. Also, I'm a dirty liar. Anyway, Mal updated saying I wasn't dead afterward, which is true. Man, I felt great right after my surgery. That whole first day was pretty awesome. I watched TV all day, text messaged like a fiend, and had a couple of milkshakes. The thing about the second and third days, though, is that is when the anesthesia really starts to wear off. Sure, I had narcotics, but those didn't really last the entire time I supposedly had to wait between doses. That whole first week or so ended up being pretty painful. I even went back to the doctor's about a week after because it was still pretty bad and I was quickly running out of pain meds. Who knew they kept narcotics so hard to get? After that 8th day, though, I turned the corner and had mac and cheese. Were you aware that Chili's serves Kraft mac and cheese and charges $3.99 for it? My server was kind enough to point that out to me. I'm currently almost-recovered and can eat pretty much anything as long as it's not chips or peanuts or anything that might tear my throat open. Which is good, because I was getting reaaaaal sick of Jello and milkshakes. Ice cream sucks when you can only have two kinds - vanilla and chocolate. No strawberry, it may have chunks in it! No fun stuff with anything mixed in, stupid, you might cause major bleeding. Oh well, thank God that's over.

In other news, my apartment in Austin is packed up and waiting in storage for my other apartment to open up. I thank the Craigslist gods that I was able to sell all the furniture that would not fit into my new place.

4th of July was all right, but it was raining all day. That's been the trend these past few days, and there doesn't seem to be any end to the rain in sight. I guess it sucks, but the other option is 100+ degree heat, so I'm not sure what's worse. Philip invited me along to his grandparents' country club for their usual 4th of July festivities, and we went, but it was pretty much eat and leave, as the fireworks were postponed until September 15. Why until September 15? No one knows. Earlier that day, we went and visited my friend Laurie, who left last night for Seoul. She's going to be stationed in South Korea for a year. Well that's one patriotic way to celebrate the fourth of July. I prefer watching several hours of soccer, what's more American than that? Come on, making fun of Italians is 100% American.

This is a Flickr badge showing public photos from Liztastic. Make your own badge here.